Buzz – The Science and Lore of Alcohol and Caffeine 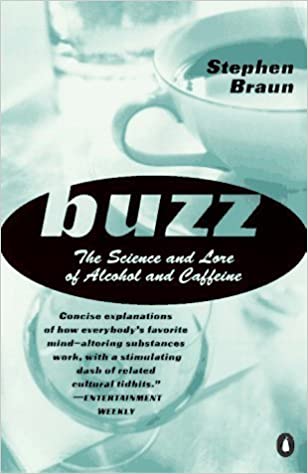 The term “proof” dates to the 17th century when various means were devised for checking, or “proving” that a beverage had the alcohol content its label claimed. The proof number is just about double the percentage by volume of alcohol. A wine with 12 percent alcohol, in other words, is roughly 24 proof.

When the stomach is empty or contains only a small amount of food, however, the pyloric sphincter relaxes and allows alcohol to pass into the small intestine which absorbs alcohol much more quickly than the stomach does.

Alcohol dehydrogenase allows the liver to detoxify ethanol at a broad range of concentrations and ambient conditions. Working at full-tilt, these enzymes can intercept and disable all the roughly 200 quintillion ethanol molecules in a half-ounce of pure ethanol in about an hour. This fact is the basis for the one-drink-an-hour rule of thumb for remaining sober.

Normally, most of the water in urine is recycled through the porous walls of the collecting tubes. But when ADH release is blocked by alcohol, the tubes become less porous, thus cutting down on reabsorption and increasing urine output.

Drinking large amounts of alcohol can lead to mild dehydration.

The second way alcohol can induce a headache is by relaxing and enlarging the same vessels in the head.

Downing plenty of water both during and after drinking can help prevent dehydration.

Drinking a caffeine-containing beverage in the morning may help also because caffeine constricts cerebral blood vessels. Taking an aspirin or two may help also, though only by masking the pain, not by solving the basic problem.

Another common hangover symptom is a general lethargy and muscular weakness. One factor contributing to this malaise is the buildup of lactic acid in the muscles that can follow heavy drinking.

The queasy stomach common to hangovers is often attributable to the increased acids secreted by the stomach in response to alcohol.

Eating a light carbohydrate such as toast, crackers, or cereal is often recommended in this situation because it helps neutralize acid and is easily digested.

A hair-of-the-dog nip of alcohol can bring some relief. But, of course, this only postpones the final reckoning and leads to more intense withdrawal symptoms later on.

Although studies have failed to find any adverse consequences on infants from the caffeine consumption of nursing mothers, the extremely long half-lives in young babies is on reason that many doctors advise breast-feeding mothers to avoid caffeine altogether.

Caffeine easily masquerades as adenosine in the brain. In fact, because it’s slightly smaller than adenosine, caffeine fits more snugly into adenosine receptors than does adenosine itself. This tighter fit enables caffeine to plug the receptor, thus preventing adenosine from binding.

Caffeine doesn’t actually make a perfect fit. If caffeine mimicked adenosine exactly it would be a depressant, not a stimulant.

Caffeine is an indirect stimulant: brain activity speeds up because it can’t slow down. By itself, then, caffeine can’t stimulate anything. It can only clear the way for the brain’s own stimulants. This explains why it’s almost impossible to overdose on caddeine. Even if every adenosine receptor in your brain were blocked by caffeine, you could still function. Other brakes such as GABA would still be functioning.

The lowest dose of caffeine known to have killed an adult is 3,200 milligrams, injected into a patient by a nurse who thought the syringe contained another drug.

In all cases of accidental death by caffeine, the actual cause is not an overstimulation of the brain but cardiac arrest induced by uncontrolled firing of the nerves that regulate heartbeat.

Ingesting more caffeine doesn’t necessarily result in greater stimulation. If the levels of your excitatory neurotransmitters are low, no amount of caffeine will boost them up.

Caffeine is biphasic, which means that it has one effect at low doses and other effects at high doses.

High doses of caffeine have a depressant effect because the caffeine interferes with another molecular regulator in the brain–an enzyme called phosphodiesterase.

Emotional arousal plays a critical role in memory. Basically, our strongest memories are of things that are emotionally provoking, in either pleasant or unpleasant ways. When adrenaline, the classic “fight-or-flight” hormone, is released during such arousal, it seems to “prime” the brain to remember things in unusual clarity. It is theorized that this mechanism evolved as nature’s way of ensuring that animal clearly remember dangerous or provocative situations they encounter.

People trying to determine wether caffeine helps or hurts performance in a given sphere of life will be left with no alternative but to become their own scientists and so their own research. They will simply have to experiment with their favorite source of caffeine, trying different doses at different times in an effort to see what works for their own unique biochemistry.

One might suspect that drug companies add caffeine to their pain-reliever products because they recognize that headaches are often cause by caffeine withdrawal and they understand that the easiest way to relieve drug withdrawal symptoms is by the administration of the drug itself.

It is estimated that in general only 10 to 20 percent of alcohol’s intoxicating effect can be attributed to increased adenosine levels. That means that even if you drank enough caffeine to plug every last adenosine receptor in your braid, you would not be staving off more than one-fifth of alcohol-induced inebriation. This is why one is well advised to heed the popular wisdom that caffeine will not offset the effects of alcohol. But, as with most situations involving these two drugs, every rule has an exception. When the amount of alcohol circulating in the brain is low and the amount of caffeine is high, the antagonism of alcohol by caffeine can be significant.

Letterman openly and self-consciously consumes a lot of coffee, in part, he says, to induce the slightly manic comedic state for which he is famous for.

To remind myself of the ways caffeine affects my mood and personality, I take occasional caffeine holidays of at least a week or two.