The Complete Book of Foosball 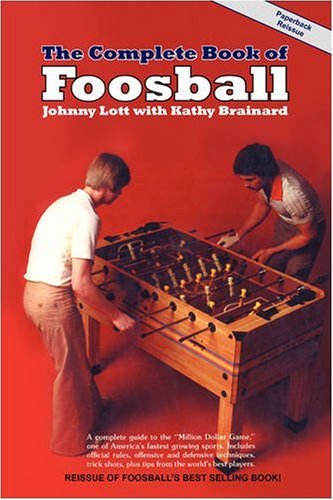 Before you begin to pass the ball, always check your three-man line. It should be positioned against the wall, and then men should be tilted forward. If you do a pass in the lane, never move the three-man line until after the pass is hit. This way you wont telegraph your pass by the position of your three-man.

Some rookies have a tendency to rush the normal skill progression by trying to shoot the long shot too fast. This can cause your shot to be jerky and inconsistent. Keep your shot smooth and increase the speed as you gain confidence, but not at the sacrifice of consistency.

Your long may not be quick enough to beat a goalie, but if it is consistent, he must move to block it. This leaves open oen of your other options. If you have learned the options properly and can disguise all the takeoffs to look the same, you should be able to score by mixing up your shots.

One way to develop a powerful swing is to take practice swings much like a golfer would do before driving the ball.

The Race – This means that they sit still in front of the bal and, as thier opponent moves the ball, they move with the oponent and try to race him or her to the open hole. The first thing to do when racing someone is analyze his or her shot. Exactly how does he or she shoot each option? Is the oponent’s dink or moving straight done with the same takeoff speed as his or her long? Don’t start the game racing at full speed, but rather at about three-quarter speed, watching out for the dink or moving straight. It’s very important that you make a mental record of the first few shots.

The Louisana Shuffle – The theory behind the Louisana shuffle is that moving the feet of the playing figures in quick circular motions covers more of the goal area and therefore makes it more difficult to score. Be careful you do not try to cover too large an area with your circles, or you will find yourself using a defense that is everywhere but nowhere.

Random Defense – The object is to confuse the shooter by randomly leaving different holes open. It’s a good idea to try to switch just before the player shoots. Be careful that your random defense does not develop a predictable pattern and timing. What makes this defense effective is its unpredictable nature.

A player may tend to do most of his or her passes to the wall, if so camp your defense on the wall and race to cover and passes that player tries off the wall.

Be sure to check and see where the player set the three-man line before passing.

You should not feel too frustrated if a player completes his or her passes through your defense. You only have one man to coer the two main passing lanes.

Decide which shot to try, block out the defense, and keep your eyes on the ball. Many times a forward will switch defennses to confuse you. Don’t let this bother or distract you. Try to choose the right shot and then concentrate 100 percent on proper execution.

The key to consistent goalie defense is the ability to remain calm, especially if you are getting scored on. Be sure to give a defense at least a game to work before you switch.

The Count System – With the count system, you don’t even look at the defense. Concentrate on the ball and your execution. First, decide which hole you are going to shoot and on what count; for example, a long on a five count. Count to fiveto yourself and then shoot long. By varying the count and shots at random, you can often score better than by trying to observe the defense.

Try to prevent your mind from wandering beyond the ball that is in play. Becoming distracted by other matters is the primary reason a player becomes nervous or feels pressured. The score in a game should never affect you. Don’t try to win games; instead, score points.

Steve Simon’s Mentality – If his opponent scores two or three consecutive points, Steve believes that odds are that if he stays “down” and concentrates 100 percent, it will be his turn to score the next few points.

Many players are upset when the opponent scores a couple of sloppy points. All this does is hurt your concentration. You have no power to change what has already happened.