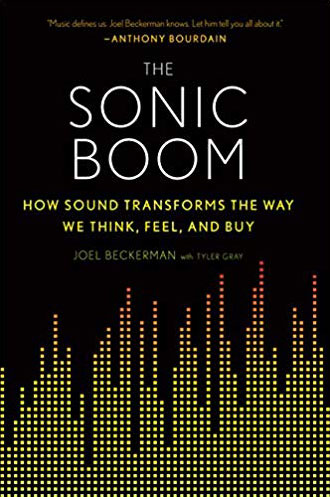 In the event of a startle, within 10 milliseconds – thirty times faster than the blink of an eye – a five-synapse circuit cause you to jump, sharply shrug your shoulders, dip you head, and turn toward the source of the sound. This is know as the orienting response

The lack in flavor in onboard meals can be partially blamed on the dull drone of the airplane engines. That type of noise makes you less sensitive to salt, sugar, and spices

People are often satisfied with a sounds’s being neat or catchy, but they don’t realize just how meaningful sound could be if it was applied to drive experiences everywhere

Sound and visuals, aromas, and more can transform a chore into a trip to a theme park

If you haven’t done the strategic work of truly understanding your story and creating an anthem that’s adaptable for all kinds of actual experiences with your brand, your logo probably reminds listeners of … your ad. Or worse, it packs no emotion or memory at all

These are all moments where expectations are set and then abruptly broken, resulting in a rush of endorphins and an addictive desire to have it happen again

As Patriots’ wide receiver Rob Gronkowski warmed up and struggled through a high ankle sprain, viewers could almost feel the pain themselves. Part of that spiky tension was carried by a piece of the reworked Williams theme called “Epic Matchup”. To kick the high tension up yet another notch when the Giants trailed the Patriots by less than a touchdown, Fred’s production team played a sped-up, guitar-laden, electro-beat theme called “End Zone E.” When he wanted to trigger feelings of triumph after the Giants seized momentum, Fred’s senior sound engineer played a trumpet-heavy, chopped-and-remixed version of Williams’s original score that we called “Backfield”

Some smartphones that run on the Android operating system have a function that begins relating the day’s events, headlines, and appointments as you wake.

As your get dressed, take a moment to think about what you broadcast through the sound of your apparel. We’re all well aware of the visual impact of fashion, but how many people actually listen to and article of clothing in a dressing room before taking it home, putting it on, and going out? How embarrassing is it to realize there’s a rhythmic vvvvil! With every step in a new pair of pants?

It turned out that Sarah was an up-talker. You’ve heard this manner of speaking? Everything sounds like a question? Even when its not? Every sentence ends on a note higher then the rest? It’s common among the millennial generation. It’s meant to keep a listener engaged, a way of saying You know? At the end of every sentence without actually speaking those words. But it frequently rubs older folks the wrong way or leads them to presume someone is younger or less experienced than he or she is.

For example, when you’re issuing a command, he say, a deep voice works best. Questions get better responses when asked at a higher register.

Years earlier, in fact, USA Track and Field, the national governing body for track and field, long-distance running, and race-walking, decided to prohibit athletes from using iPods and music players while they competed “to ensure safety and to prevent runners from having a competitive edge.” Runners protested, and a version of the rule now applies only to competitors who receive awards or money. So you’ve got the go-ahead to get high on tunes.

Your individual PIN would always be unique, and no one could hear the numbers you’d typed, but the first, seconds, third, and fourth numbers (whatever they were) would always play the notes of the familiar sonic back logo as you made your secure transaction. Your brain would hanker to complete the little song because it craves familiar patterns, and you’d have heard this one all over the place.

We created alert sounds that let you know (if you opt in of course) when rain – pr something more threatening, like a hurricane or tornado – is on the way. And the signal becomes more insistent with the severity of the weather event, sounding almost like an alarm or warning that sonically suggest you hightail it out of wherever you are and run for cover. The point is, you feel the message of impending threatening weather before you even take your phone out to look at the details.